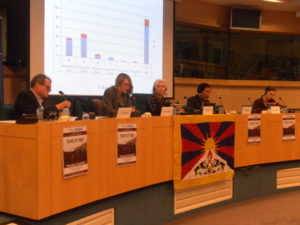 Brussels, 10 April 2013 : On the initiatives of Estonian MEP Kristiina Ojuland and Lithuanian MEP Leonidas Donskis, the ALDE (Alliance of Liberals and Democrats for Europe), group hosted a seminar on Tibet for the third consecutive year in the European Parliament.

In light of the escalating crisis in Tibet with 114 tragic self-immolations to protest the repressive policies of the Chinese government, this year’s seminar very appropriately entitled “Tears of Tibet” aimed to highlight the underlying grievances of the Tibetan people that drive them to self-immolate and to assess the direct impact of the Chinese policies on human rights and environment in Tibet. The seminar also aimed to review the European Parliament’s approach in helping to resolve the Tibetan issue peacefully. The ALDE group believes that the EU ought to take a stronger stance in diffusing the growing tension in Tibet.

While welcoming everyone to the seminar on Tibet in the European Parliament MEP Ojuland introduced the panelists to the audience. She was of course proud to be hosting this seminar on Tibet for the past three years but expressed the need for more to be done in order to achieve a tangible result.

Ms. Kate Saunders, Director of Communications of the International Campaign for Tibet retraced the chronology of the self-immolations in Tibet since 2009 while evoking the reasons behind it and holding the repressive policies of the Chinese government entirely responsible for the loss of Tibetan lives. She also touched on the summary of China’s strategic objectives and concluded with a few recommendations for further actions.

Ms. Katia Buffetrille, Ethnologist and Tibetologist of the École pratique des hautes études in Paris, also focused on the self-immolations and freedom of religion from a human rights perspective.

Mr. Roy Strider, Estonian writer, human rights and social justice activist focused on the imminent dangers of radicalization of the Tibetan movement if the EU and the International Community did not support the non-violent struggle of the Tibetan people with more determination and political will.

Mr. Ngodup Dorjee, the Representative of His Holiness the Dalai Lama, focused on the impacts of the Chinese policies on the Tibetan environment. The recent report brought out by the environment desk of the Department of Information and International Relations on the Gyama mining incident was made available to the public.

“We have always adopted a pragmatic approach based on reality and common interest in this inter-dependent world. We remain committed to finding a mutually beneficial solution through dialogue and non-violence. Therefore, we urge you and your governments in concerted effort with other nations of the free world to intervene and impress upon Chinese leadership to look into the actual causes of the Tibetan people’s discontentment and to redress those issues which will pave way for seeking a peaceful and lasting solution to the Tibetan issue”, said Mr. Dorjee.

After the intervention of the panelists, the floor was open for discussion during which University students and Parliamentary assistants asked interesting questions as to EU’s stand vis-à-vis Tibet.

In his concluding remark, MEP Leonidas Donskis said the Tibetan issue was a litmus test for the world and moral and political sensibility test for humanity. “Free market economy goes hand in hand with democracy. Making a concession on human rights will be a failure of the modern world”, said MEP Donskis.

He further said that 114 instances of self-immolations was a tragedy and we should not allow politic to triumph over conscience.

MEP Kristiina Ojuland with the support of her political group ALDE hosted a similar seminar on Tibet entitled “Tibet in Flames: the unfolding personal and collective tragedy of the Tibetan people” in March last year.